The Inexorability of Stamina 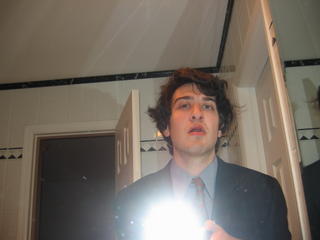 I haven't been this drunk in a long time... probably years.

Admittedly, I did it to myself. There isn't a single person I could possibly blame this on, and with the complete lack of visual and auditory perception, I'd say at this point it's a little too late to even bother.

So the question presents itself... What next?

There's a blonde in one of the back corners. She's dressed well, talking to some suit who's playing himself off real cool, got the top button undone and the tie hanging loose off his neck. Holding his drink down at his side, waving it around suavely as he paints some kind of elaborate picture. They're laughing at each other's jokes, the jokes that aren't all that funny, just sad or ironic little anecdotes from their lives that they laugh at because, well, they want to get in each other's pants. But nobody says that. You gotta dance the dance. You gotta play the game, even though with a flick of the wrist you could play the "let's get out of here and fuck each other's brains out. You know you want to," card. Nobody plays that card. Unless they're drunk like me. But when you're drunk like me, it's because you're not laughing at things that aren't funny. You're not laughing at all. You're plain miserable.

I turn down the idea of butting in to try and steal her, which will result in fucking her, getting hit in the face by one of them, or perhaps both. While I'm in the bathroom taking a piss, I stare at myself in the mirror. I put on my best stern face and try to act like I'm handling the situation with him. I tell him to get lost, the girl's not interested in his absurd atrocities, his lame stories about how he dislocated his shoulder snowboarding, or how his girlfriend ended up dating his sister. But looking at my own face, with one eye clearly more open than the other, I'M not even buying it. Quite frankly, I'm not even sure I understand the words coming out of my own mouth.

And I'm ENTIRELY sure the guy next to me doesn't either. I look at him with a sideways grin and eyes that roll back in my head when I blink. I try to snicker but it comes out in a spray of saliva. I fart, too.

I hit my head on the sink when I bend down to wash my face. I throw a hissy fit until I realize that I didn't actually feel a damn thing.

When I get back out into the bar, the guy and girl are gone. They cashed in their chips. But people are starting to look at me cock-eyed, and I'm so fucking gone that I can't tell if it's because I'm so blatantly drunk or if it's because I've got a welt the size of my fist on my forehead and I think it's bleeding.

I walk right out the front door.

On my way home, I vomit in someone's trash bin that's out by the curb.

By the time I get home, I've forgotten to put out my own pail.

My vote is usually the former, but sitting here unable to decide whether it's my own hand or someone else's that's touching my incredibly limp fallus, it dawns on me that maybe that monkey isn't paying one iota of attention to the fact that he's fondling himself, completely oblivious to the fact that what he is doing would be wrong if he only had a few more chromosomes.

My lack of erection seems the satisfying assurance I was looking for that bedways is right ways. I nod in accordance and address the room in an accent becoming of the most stereotypical British butler I can think of.

"I shall now retire to my bed to slumber, as I shall not achieve an erection on this night, the..." I exaggeratedly slump my head down and lift my arm up to look at the date on my wristwatch.

"I'm sorry everyone, it appears that I have lost both my watch and my train of thought. I good you bid evening!" I laugh at my own joke because, clearly, no one else will. The blonde is probably riding the suit just about now.

I start to imagine her on top of him in my bed. She's butt-naked, riding him like he's a god damned horse. She's bucking so hard that her tits actually make noise when they get to the top of their ascent and the bottom of their descent. And they look fucking great. Better than I thought they did at the bar. She's got one hand on each of his hips and she can't decide whether to throw her head back and grind harder against him or throw it forward, getting her locks in front of her face just enough that the fire in her eyes doesn't burn him to death when he looks back at her.

My penis wants to play. I watch her tits, sitting on the edge of my bed, and bring myself to orgasm all over my wood floor. I look down at my hand, wipe it off on the edge of the comforter, and crawl to the pillow.

Just before I pass out I recall the audience I was addressing a moment ago. I throw up a hand in a single gesture of "goodnight, farewell."