Yesterday, I had the pleasure and privilege of shooting the cast of Something Awesome, being directed by my good friend and roommate Cai Hall. And what a shoot it was. I already knew the cast was a ton of fun to work with from having shot the pilot episode myself, and from shooting stills on their most recent shoots, but I had no idea how much fun it would be to just let them let loose, direct them into delirium, and snap picture after picture of their funny, beautiful faces.

We shot a lot of different looks to correspond with different points in the series to come, different character portraits as well, but one photo stands out among them all for me as the penultimate shot, the be-all and the end-all, and I couldn't help but share it with you. Here it is, in its untouched glory: 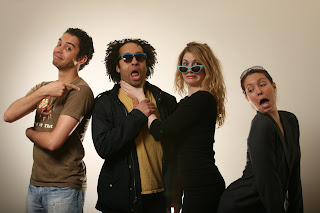